The Leica R9 is a manual focus 35 mm single-lens reflex camera produced by the German firm of Leica as part of their R series of cameras. It was released in 2002, replacing the very similar Leica R8, upon which it improved in several aspects.[1] Unlike other manufacturers, Leica has never offered autofocus on its top-of-the-line models such as the R9, or the M series rangefinder cameras.

The R9 can be fitted with the “Digital Modul R” (DMR) 10-megapixel digital back and used as a digital camera; during the DMR’s production run from 2005 to 2007, the R9 and the R8 were the only 35 mm film SLRs capable of taking a user-installable digital back. However, as of March 2007 Leica discontinued the Modul R back, ostensibly because of change in relationship with the digital manufacturer Imacon[1]. 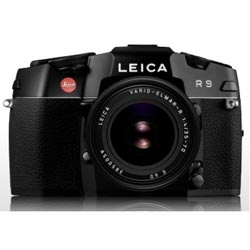